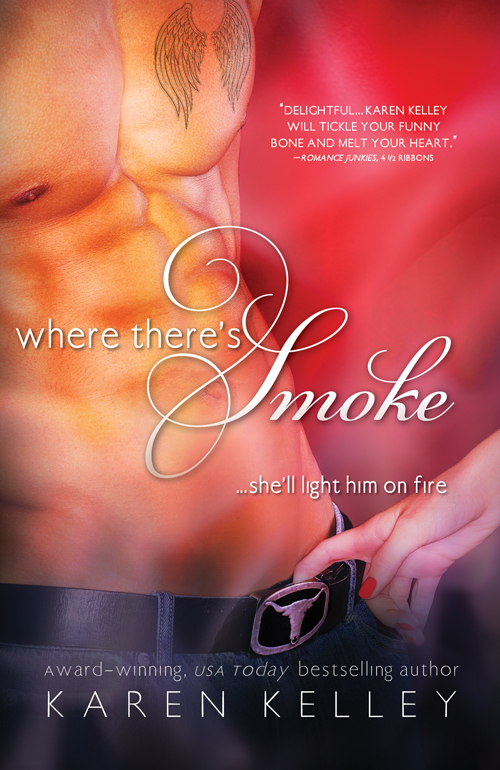 Destiny Carter was six years old when she had the first inkling that her life wouldn't be a fairy tale. That was the day her mother left her in a grocery store and never came back. Destiny was right, her life went downhill from there. Bad foster homes, bad boyfriends, and really, really bad choices.

Then she died and went to Hell.

Until she was kicked out.

Destiny landed on the sidewalk with a hard thump.

"Son of a bitch!" She grimaced as she came to her feet, rubbing her hands over her tender backside. She was probably the first person ever to get kicked out of Hell. Temporarily, that is.

Hysterical laughter bubbled inside her, but she quickly tamped it down. She was not going to lose what little bit of sanity she had left. She would get through this like she did everything else, by gritting her teeth and doing what she had to do.

All is not lost. Just take a deep breath.

Ugh! Her nose twitched as a god-awful stench filled her space. She glanced down the deserted street. Faded army-green painted letters on a shabby storefront window proclaimed it as Ft. Worth's finest resale shop.

Oh hell, she'd landed close to the stockyards in Ft. Worth, Texas, but this wasn't Billy Bob's. No, skid-row bars and vacant buildings lined both sides of the street.

Could her day get any worse?

Not that she had anything against Texas, except it was hot as hell. The dry heat was not helping her mood.

"I couldn't manage to steal one more soul?" she grumbled.

Okay, so she wasn't the best salesperson in the underworld. Why didn't that lawyer just sign on the dotted line? He insisted on reading the fine print and before she knew it, poof, he was gone. One more soul and she would've been a full-fledged demon with all the rights and privileges of that position-like drinking, gambling, and lots of sex.

"Sex," she breathed on a sigh as she slowly combed her fingers through her long, black hair. Naked, straining bodies. Hands touching, caressing. She bit her bottom lip and forced the vision to go far, far away before she grabbed the grungy-looking bum leaning against the vacant store front and had her way with him.

Now she was one step farther from her goal. The ones in charge were really pissed, but at least they had given her another chance, and new orders: corrupt someone and drag the unwitting person back to Hell. She had one week to do it or else. Why the fuck had they tacked on "or else"? What were they going to do? Send her to Hell?

Okay, shake it off. Getting kicked out was only a minor glitch. She could take a soul in less than a week. A moment of panic sent a shiver down her spine and her bravado drained away. Who was she kidding? Only dying souls caught between Heaven and Hell were sent to the sorting station. Her job was to convince them Hell was their best choice. She didn't have to search them out. Nothing ever went right for her in life. Why did she think being dead would change things?

No, she could do this. She would survive.

A flashing neon sign suddenly caught her attention when one of the bulbs popped and blew out. THE STOMPIN' GROUND. A bar. Her mouth watered. Demons-in-training weren't allowed to drink, or do much of anything on the job, and they were always on the job. One drink wouldn't hurt, and a bar would be a good place to start looking for a corruptible soul. In fact, it was her duty to go inside and check the place out.

A slow smile curved her lips as she slid her hands slowly over her body and the plain, butt-ugly, black wool uniform shift became a tight-fitting, low-cut, fuck-me red dress that shimmered with each slow, seductive step she took. Yeah, she was bad. Life made her that way. That's why she went straight to Hell. You never saw a good girl in Hell.

The bum's mouth dropped open. He looked at his wrinkled brown paper sack that obviously held a bottle of booze, then back at her. She grinned and winked. He tipped the bottle to his mouth, guzzling down more alcohol.

"See you in Hell," she muttered.

Destiny made her way to the bar, then pushed on the door, stepping inside the cool, dimly lit interior. As soon as her eyes adjusted, she glanced around. A haze of cigarette smoke formed a gray cloud above the patrons.

Slim pickings. Only a handful of people sat at tables.

Two worn out hookers were strategically positioned close to the door. Too easy. They already had Hell stamped on their foreheads. Destiny wanted to impress the powers that be. Used-up hookers would not make an impact on them.

A couple of men sat at another table deep in conversation about a stupid football game. Not bad looking. Wedding rings glinted on their fingers. Married. Too much trouble.

Before she could take a step toward them the bathroom door opened, spilling a patch of light into the bar. Two laughing women joined the men at their table. Scratch that idea. Two was company, four was a crowd.

There was a lively group of barely legal college boys chugging pitchers of beer. Hmm, certainly corruptible. From the way they were dressed, they were definitely slumming. One guy glanced her way, eyes practically bugging out.

Oh hell, was that drool? No thanks!

Someone put money in the jukebox and a slow country song began to play. For a moment, she let the deep voice of the singer wash over her. She didn't even mind that he was crooning about his cheating wife and losing himself in a bottle of whiskey. Damn, she missed being alive.

Her gaze languidly drifted around the rest of the room, past dark walls with posters of country singers plastered all over them. The bartender wiped a damp cloth across one end of the bar. Destiny's eyes narrowed as she sized him up. The potential was there.

He raised his head, saw her, then smiled. The kind of smile that made her feel good all over. He wasn't bad looking, in a good-old-boy sort of way.

Destiny drew in a deep breath as she readied herself for a full assault, but at the last minute a movement at the other end of the bar caught her eye.

A lone cowboy sat on one of the stools nursing a beer, his back to her. He wore a black T-shirt that deliciously hugged his broad shoulders. Her gaze dropped. The jeans weren't bad, either. Nope, not bad at all. The guy had a great ass from this angle. Sweet! Cowboy had just enough muscles that he created a fantasy, but not enough that she would be in competition with his ego.

He turned and looked her way, his gaze sliding sensuously over her body. Tingles of excitement tickled her spine. She had such a fondness for cowboys. They knew how to ride 'em long and hard, and she was all for long and hard.

She devoured him with one long lazy look. His black Stetson was pulled down low on his forehead as though he didn't give a damn about anyone or anything. It didn't help that, for some insane reason, black cowboy hats turned her on.

Oh baby, she was about to make his wet dreams come true. Yee-haw, ride 'em cowboy.

The bartender was forgotten as she locked on target. Destiny slid her hands over her hips nice and slow before sauntering toward him, putting just a little bit of swing in her hips.

This time she would be the one calling the shots. The one in charge. No one would ever control her again like they had when she was alive. She would take what she wanted and to hell with the rest! Literally.

The cowboy watched her every step of the way. She was already wrapping him around her little finger and the poor guy didn't have a clue. She stopped beside him.

"Buy a lady a beer?" she asked. Her words held enough invitation that only an idiot wouldn't guess she wanted more than a beer, and this guy didn't look like an idiot. She slid onto the stool next to his, propping her elbow on the scarred wooden surface of the bar.

Over the haze of smoke, over the smell of alcohol, Destiny caught another scent that weaved its way around her, making her lean in a little closer. It was spicy and held a promise of nights filled with down-and-dirty sex. She could feel the waves of heat radiating off him, curling around her body and wrapping her in a sensual cloud of sexual awareness.

"A beer for the lady," he drawled, breaking into her fantasy and nodding toward the bartender.

His voice sent tingles down her spine. It was just a little raspy-low and sexy.

Cowboy swiveled his stool around to face her and tipped the brim of his hat with one finger so she got a better look at his face: the strong jaw, the slight stubble, and the most intense blue eyes she'd ever encountered.

Destiny had her first mini orgasm, and it felt so fucking great! This guy looked good enough to eat. She was going to enjoy corrupting him.

"What's a cowboy like you doing in a bar all alone?" Okay, that sounded pretty cheesy, but she was a little out of practice; she'd died in 1959.

"Waiting for a woman like you," he replied and again his words caressed her as his blue-eyed gaze drifted lazily down her body before returning to her face. Her nipples tightened.

The bartender set a beer in front of her. Cowboy dropped a few bills on the counter and the bartender left.

She grinned as she took the bottle, her tongue sliding nice and slow around the rim before she brought it the rest of the way to her lips. She tilted the bottle a little and ice-cold liquid slid down her throat. Nice. She'd missed the taste of alcohol.

"So, what's your handle, cowboy?" she asked after she lowered the bottle.

"Well, you've just met your destiny." She grinned. "Destiny Carter." She thought she might hav...

"Kelley burns up the pages... This book is witty, sexy and a lot of fun. Readers won't be able to wait to read the next installment! 4 Stars" - RT Book Reviews